Poggiotondo is located in the western part of Chianti, on the hills that connect the Montalbano with the Arno Valley.  This region is more directly influenced by the Mediterranean, which gives Poggiotondo a milder climate than others in Chianti.  The soils at Poggiotondo have a marine origin with plenty of limestone fossils (seashells), which have a strong impact on the wine flavours.

Alberto Antonini, the owner and winemaker at Poggiotondo, makes his wines in a modern style, whilst adhering to the true regional characteristics of the Chianti region.  A few years ago Alberto decided to move back to traditional vineyard management and  stopped using synthetic chemicals (herbicides, chemical fertilizers, systemic spraying agents etc) in order to regenerate the soil and make it ‘alive’.  Most of the conventionally managed vineyards’ soils are dead, and dead soils grow dead fruit which is responsible for dead wines.  By encouraging the vines to develop their own antibodies, Alberto is  experiencing healthier vines, better fruit quality, character and a very likely longevity of centuries of the vineyards themselves.

Interview: “Has Alberto Antonini opted to lead rather than follow the market?”

“(…).  Antonini champions wines with “energy, purity, vitality, tension and minerality” rather than what he calls, with deliberate exaggeration, “concentration and viscosity, with three layers of barbecue sauce and ten pizza toppings”.  The five enemies of terroir, he continues, are “over-ripe grapes, over-extraction, over-oaking, vineyard chemicals and the winemaker”.  Rolland is no fan of chemicals either, but Antonini, unlike Mr Merlot, wants to be invisible in his wines. “If you recognise me, not the place, I say, ‘Shit, what have I done wrong?’ ” As you’d expect, Antonini doesn’t like new oak.  “Casks are like vines,” he says, “they tend to get better with age.”  He’s moving away from stainless steel, too, because it “smells and tastes like death” in favour of concrete, “which smells of life”.  He’s some way from being a “natural winemaker”, but he champions Mother Nature. “My academic training taught me that we had to fix things all the time in the winery, by adding tannins, yeast, enzymes, nutrients and oak.  But what are we afraid of?”  Antonini thinks that consumer tastes are shifting, but he wants to lead the market, rather than follow it.  (…).  “It’s time we persuaded people to switch from Schwarzenegger to Michelangelo’s David.”  Michelangelo or not, the thing that strikes you about Antonini’s wines is their drinkability. “How have we allowed people to persuade us that drinkabilty should not beassociated with great wines?” he asks. “It’s crazy.”
Tim Atkin MW, Harpers Wine & Spirit Trade News, November 2017

“(…). As part of the consulting work Antonini does around the world, in 2010 he was offered a job in the region of Yeghegnadzor, Armenia. In their first conversation, the producer told him he wanted a ‘modern’ wine. Antonini, his voice calm, his manner zen-like, replied that if what he meant was a wine from local grapes and fermented in amphorae, like the wines made 6,000 years ago in Yeghegnadzor, then that was the ‘modern’ wine he needed. ‘The wine of the future will be the wine of the past,’ says Antonini. And that’s the vision that, even after a 30-year career, sparks this Italian winemaker’s excitement – the idea of returning to absolute simplicity in order to achieve the best possible interpretation of where wines are born.  But that wasn’t always his goal. Antonini today advises wineries in places as diverse as Maldonado on the Uruguayan coast, or Caltanissetta on the island of  Sicily. But it all started in Florence, where he graduated in oenology and viticulture in 1985. His first job was as an assistant winemaker at Frescobaldi, and then he become technical manager at remarkable Tuscan wineries like Col d’Orcia and Antinori. In 1997, however, he decided to work as a consultant, and it was then that his influence began to be felt.  Many of his clients are in Italy and he has his own winery, Poggiotondo, in Tuscany, where he lives when not travelling. (…).”
Decanter Magazine, July 2017 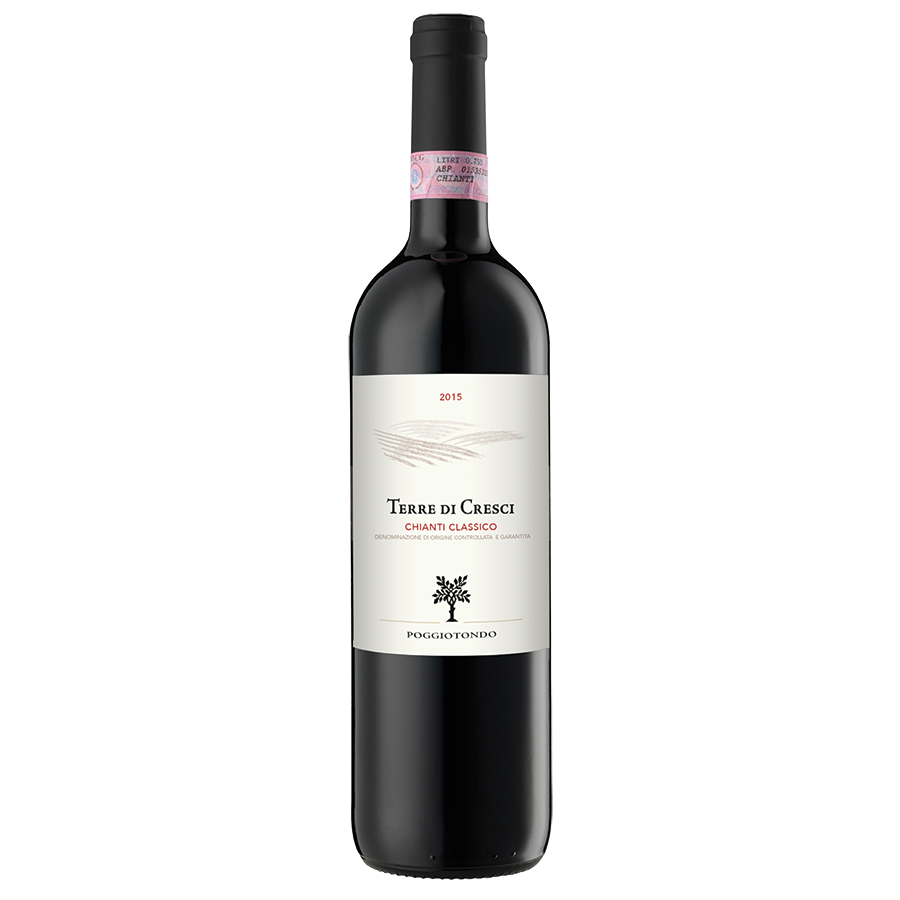 The grapes for this wine are sourced from seven hectares of vineyard area in Montefioralle between Greve and Badia a Passignano, in the north-western part of the Chianti Classico appellation. Vineyards are located at altitudes of 350-450 metres above sea level (higher elevation than the Poggiotondo home estate vineyard), and face the South West and the South East. Soils here… 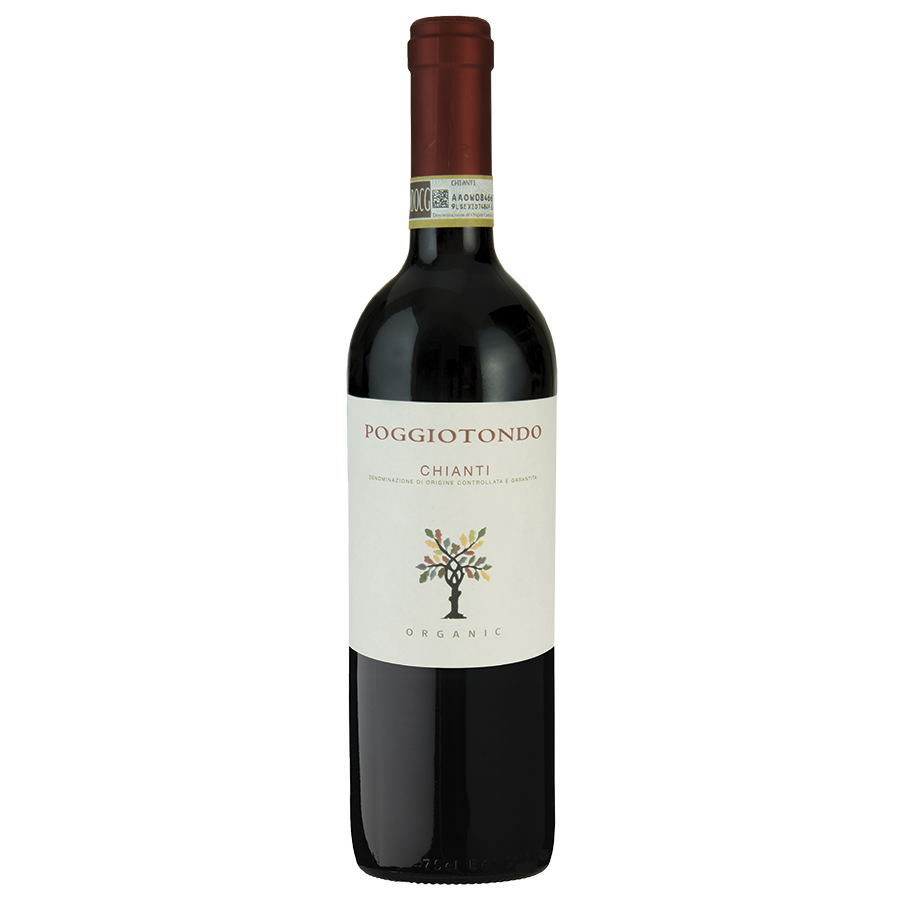 This wine is deep garnet red in colour.  On the nose, dried oregano aromas mix with dark and red cherries. Ripe cherries on the palate are balanced with grainy tannins, typical of traditional Chianti, with vibrant, fresh acidity on the finish.  Succulent and juicy with herbal notes, texture and fine tannins.

Deep garnet red in colour, intense complex aromas of dark berry fruits, green leafy herbs and a dark chariness fill the glass.  On the palate the wine is consistent with the complexity of the aromas.  Dark berry fruits are quickly surrounded by savoury herbs and spices with hints of tar, complimented with fine juicy tannins which fill the mouth and… 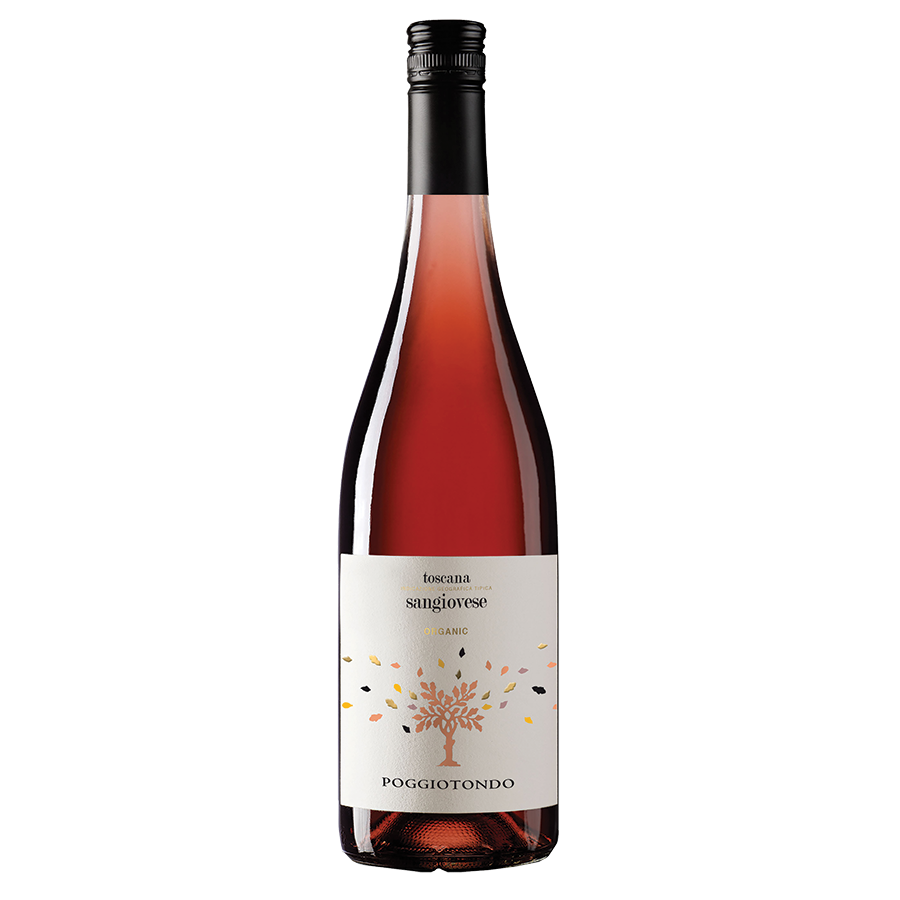 Sangiovese’s naturally high acidity lends itself wonderfully to producing Rosato. The whole cluster were gently pressed and the juice naturally settled at 8 celsius, it was then rack off the gross lees and followed by fermentation in temperature controlled stainless steel tanks at 18 c for 20 days. The wine remained on the fine lees for several months and was…

70% organic Sangiovese and 30% organic Canaiolo from the Toscana IGT (Indicazione Geografica Tipica) appellation.  Fermented in cement tank without oak maturation to capture the vibrant essence of the grapes. A savoury, earthy wine with fascinating aromas of herbs and dark spices, supported by firm, dry tannins.